Went to a jazz performance by the North Rhine Westfalia Youth Jazz Orchestra the other night.  It was held at Toowoomb Hospital which seems like an odd place for a jazz concert but they have a good concert hall/auditorium there and the building is quite attractive all surrounded by palms and covered in scrolled and flowered iron works. 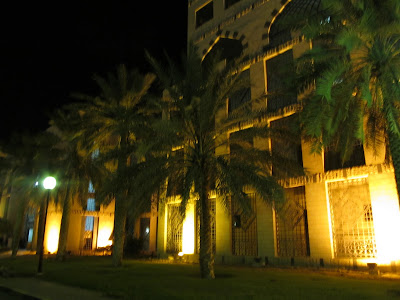 While there, I learned that this was the season's opening performance and that I should expect pretty good things to come.  The Sheikh and his mother, the Sheikha sponsor all kinds of great acts.  Last year they had Yo Yo Ma perform outdoors in the fort and before that was Winton Marsalis with his band and Bobby McFaren.  The tickets are always free or very cheap.  Last night was free.

The show was a interesting mix of styles with two German conductors and one Argentinian and each musican had a solo of one sort or another.  They had everyone dancing in their seats including me. 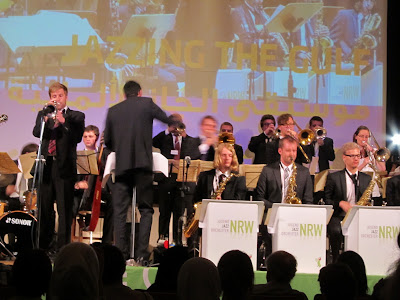 There is a pretty famous local DJ working a dance at the Equestrian, Shooting, Rugby, Golf Club (yes, that really is the name of the place) this weekend so I might hit that next.

On another front, I've booked a flight for Nepal this November so I'll be celebrating my birthday at the foot of Everest.  I'm pretty excited about it.  It's too bad I left my trekking boots in Canada because now I'll have to break another pair in but I guess I can always use that as an excuse to walk slowly if I want.  :)
Posted by Nicole at 2:59 PM