Went up to Dubai last weekend with Patreshia and met Rick for a day at the Dubai Literary Festival.  It was being held at the Intercontinental Hotel right on the marina...beautiful boardwalk lined with restaurants and, I can't believe I'm going to say this, it was a little chilly with a breeze off the ocean.

My first author of the day was Alan Dean Foster who is an extremely talented and prolific writer of sci-fi.  He also writes novelizations of sci-fi movies like Star Wars, Star Trek, Aliens and many more.  It was wonderful getting to listen to his views on good vs bad sci-fi.  I was impressed enough to download a couple more kindle versions of his books this week.

Then, Rick and I went to listen to Dan Rather talk about his new book.  He was just stopping by  Dubai on his way to Afganistan to do another story..at the age of 81.  Crazy!!!  His book was mostly about how CBS booted him out over his coverage of the Bush campaign.  He demonstrates how huge corporations are buying up news outlets and forcing them to censor themselves for the 'good of the corporation'.  Nothing new in my opinion but I guess it was interesting to hear it right from the horse's mouth. 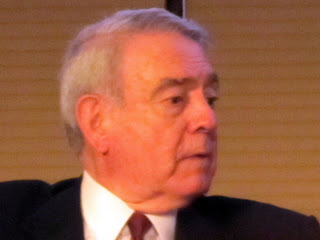 ﻿
Rick and I enjoyed a nice lunch outside at M&S and chatted about the fate of the world...didn't solve much but the company was nice.
Posted by Nicole at 3:01 PM


my page; smells that attract men to women

I ordered a gorgeous ring from Dangle Dangle and it had been on
again buy, but conversation to allow me to know the status of my buy was updated often and whenever I obsessed about it.
I now have my ring as well as the images did not
get it done justice, it really is gorgeous. Dangle Dangle is currently
my visit jewelry store. Many thanks once again!!

the brad pitt workout looks of curiosity to me, i would
love to have a physique like he had in troy