The Eagles have landed...in Dubai

Myself, some friends, and about 20,000 other people watched the Eagles concert last night at the Sevens Rugby Pitch in Dubai.  Fantastic is too mild of a word for the performance.  They put on a hell of a show.   Glen Frey started the show with "Same band, different dessert".  He told a few jokes about the band being old (same age as the UAE at 40) and also made light of their past fights with each other...he was funny without trying too hard.

The music was brilliant.  All the greatest hits with a handful of the solo hits too.  I was really impressed with the harmonies of Lying Eyes, Take It To The Limit and Peaceful Easy Feeling.


Joe Walsh's Rocky Mountain Way was brilliant, and even if he does look a bit grandfatherly stomping around with his guitar, he still belts it out like a madman.  His line "My Maserati does 185" couldn't have been sung in a more appropriate country. 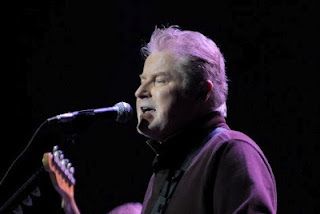 Don did Boys of Summer and Dirty Laundry as well as Long Run...he looks fantastic and sounds exactly the same as on his albums.

It was a great night in the open air venue after a severe sand storm that brought the first rain of the year and there was a cool dessert wind in our hair, with the smell of Jasmine rising up through the air :)
Posted by Nicole at 9:15 PM No comments: 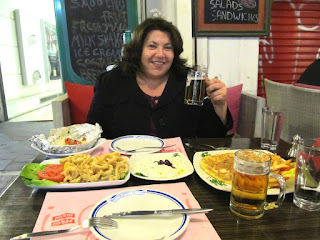 Just spent a whirlwind week in Greece and I already want to go back.  Sharon and I had a great time eating and drinking our way through the country but there was so much we didn't have time for.  On our first evening there, we found a great little hole-in-the-wall restaurant that we compared every following place to and returned two more times to have their roasted feta with vegetables.  Alfa beer is not to be missed :) 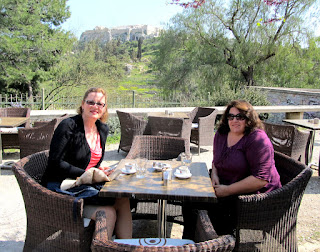 We also took a lot of coffee breaks as this seems to be the main past time of Athenians.  Here we are in Plaka with the Acropolis behind us.  We had just finished walking the huge Sunday market and looking at the secondhand junk and handmade crafts and decided to try the tiny cups of 'Greek' coffee.  A little on the gritty side but strong.  Most people had tall glasses of coffee with 'fredo' (icecream) which we tried at another coffee stop. 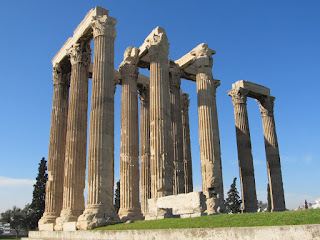 Our first day was spent at the two most famous ancient sites in the city.  First the Temple of Zeus which was deserted and standing forlornly in a field down the block from our hotel.  It impressed me with it's gigantic columns.  The whole thing took over 700 years to build due to Athens being sacked repeatedly and was finally finished by the Roman Emperor Hadrian who had a special affection for Athens.  I've actually become rather obsessed with Hadrian after this trip as I had seen some of his building works in Jordan and will be seeing his famous wall when I go to the UK this summer.  He was a fascinating character (more to follow). 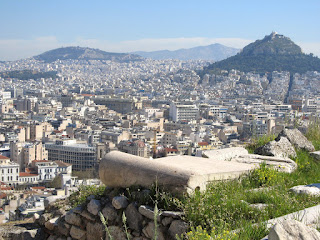 I was more impressed with the view of the city than with the actual Acropolis as a lot of it is under scafolding with debris and equipment laying around.  A lot of what is there is now a replica as most of the original has been moved over to the museum.  I didn't really feel the connection to the past like I have in places like Ephesus or Ankhor Wat.
One nice feature of Athens is that we could buy a package of tickets for 12 euros that let us get in to the Acropolis and all of the other important ancient sites so we tried to see as many as possible through out the week. 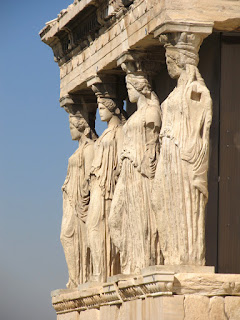 ﻿Sharon really enjoyed the Acropolis and was especially happy to see the Caryatids (lady columns).  The ones here are replicas but we saw the real ones in the Acropolis museum which really impressed me.  They've built the museum over a dig site so you can view the ruins through transparent floors.  They also took the carvings from the top of the Parthenon and placed them around a huge rectangle room on the top floor so it's as if you were walking around the original, which you can see by looking through the glass walls of the museum.

The Caryatids are in a special room that allows the restorations to be done with a newly developed laser.  We watched them working for a while and it was pretty amazing watching as they lasered off centuries worth of grime. 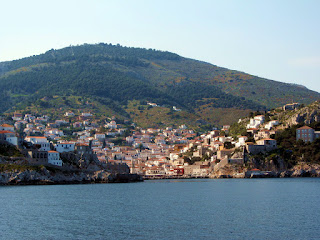 ﻿We did a day tour of three islands on the next day.  It was a perfect sunny day for lounging on deck so the boat ride was great and a couple of dolphins even made an appearance, skipping along the bow.  My favorite island was Hydra because it was quaint and compact.  There were donkeys and cats everywhere as we walked through the tiny white washed streets, taking photos and ducking into shops.  We also walked out of the village a little bit and saw a great place to go swimming in crystal clear blue water.

﻿﻿﻿﻿
﻿﻿﻿﻿﻿I'm definately going back to stay on one of the islands, probably Santorini.  I'm thinking that this time next year would be good but early summer would also be fine.  I saw a lot of 'rooms' to let signs everywhere so it should be easy to arrange.

There were so many winding alleys and staircases that just begged to be followed...can't wait to go back. 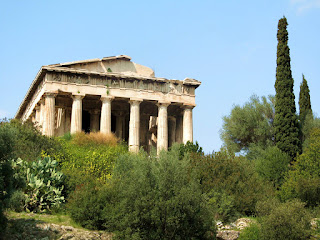 At the bottom of the Acropolis is  the Agora.  This was the lifeblood of the city.  It's the place where democracy was first tried out, where Paul converted Greeks to Christianity, where Plato spoke and where Athenians went to shop or see a show.  It's now a great green space with florand, fauna, ruins, churches and temples.  I loved it here and we visted the Temple of Hephaestus, the most complete and my favorite of the whole country.  Hephaestus was the God of the Forge.  The temple was used as a Church until the 1800s and it would have been interesting to walk through the interior but it was roped off and it looked like they were doing some repairs. 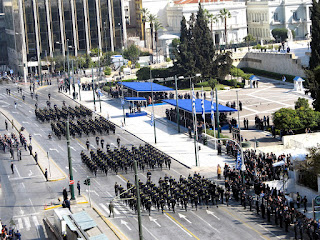 We happened to be in the country for Independence Day which was a bit unsettling as they had been protesting in the streets with firebombs recently.  Luckily for us but, perhaps unfortunately for democracy, they closed off all the streets for the big military parade to prevent trouble.  We got to see if from our hotel balconcy.  Army, navy, airforce, search and rescue, red cross, forest rangers, divers, and guys with white togas and pompoms...oh my!  That's the Prime Minister sitting under the little blue tent.
There were also hundreds of police officers out on the street and we noticed that all of them were really good looking...like GQ good looking. It became a game to try to find an ugly cop and it took me four days to find one. 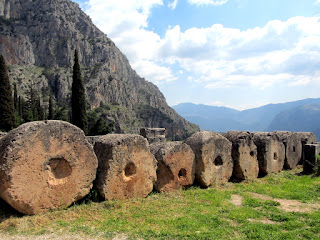 We got out of the city the next day to visit Delphi...I had an important question for the Oracle but it turns out that she only gave answers twice a year...nice job if you can get it!  The countryside was beautiful and we saw Mount Parnasus with its snowy peaks.  The ruins at the bottom of the mountain were pretty thoroughly ruined but the whole site was covered in wild spring flowers so it was still worth visiting.  It turns out that a large part of the world was colonized by Greeks after they visited the Oracle for advice.  Istanbul and Ephesus are two examples.  Apparently the advice was kind of obscure but they put on a good show.  They would sprinkle cold water on a goat and if the goat shivered, that meant that the God Apollo would speak through his vessel the Oracle and you would get an answer. Before getting to the goat, you had to purify yourself for seven days...cold water was a big part of this deal. 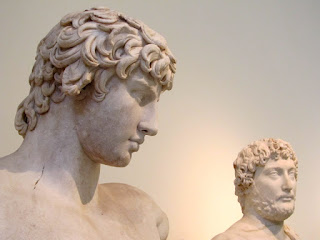 The last day we went to the big museum and I got to find out more about Emperor Hadrian.  It turns out that he was a great traveler, slept alongside his soldiers, helped out the poor, created massive building projects to stengthen the empire and had a tragic love affair with a young Greek man named Antinoos.  After Antinoos drowned in the Nile, Hadrian went a little nuts.  He turned the young man into a God by starting a cult, building a city named after him, having over 200 statues created and naming a star after him.  Due to the large number of statues and paintings made of this beautiful young man, he has often been used as the model for the ideal male form...I had no idea and had never heard of this so I was amazed at the large impact that the two had on art.  The museum has placed busts of the two men together in a kind of touching way.
This tragic love story has an even wider impact because, n his grief over Antinoos' death, Hadrian, who had always been very tolerant of Jews, had them all thrown out of Jeruselum and created the state of Palestine which has, in turn, created all the strife in the Middle east that we have today. 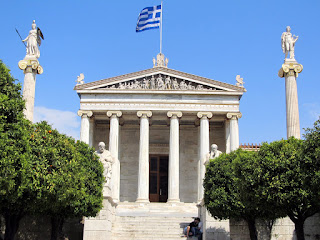 I hit a cheaper part of town on my last day to compare...coffee in the tourist area is about 4euros and 1.50euros in the rest of town. Graffiti is everywhere including the rich areas.  Traffic is bad all over town.  The pretty green squares with their flowers and orange trees disappear outside of the tourist area.
As I was walking back to the hotel on the final day, I got a perfect picture of Greece at the University of Athens.  You can see the classical Greek architecture, with the Greek flag in the center, Athena on the left stella, Apollo on the right, Plato and Socrates seated in front and, if you look closely, you can see two sweet Greek boys kissing on the stairs.
Anyways,  we had a great time strolling the steets, drinking Alpha beer, eating baklava and learning about ancient history.  Two final pictures to finish the story, a lovel springtime scene of the Agora and a typical tourist shot of the Acropolis which I like because Sharon and I are both in the picture together. 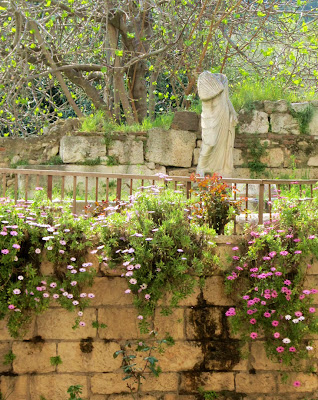 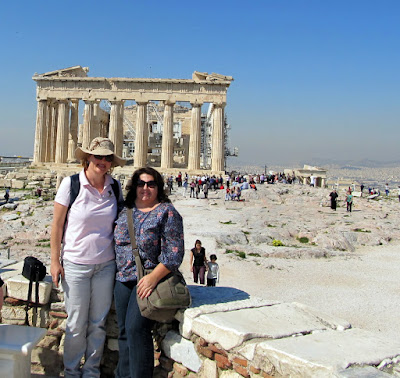