Went up to Dubai again last weekend to see a Flamenco show.  We stopped at the bird refuge along side the highway and got a glimpse of the flamingos. 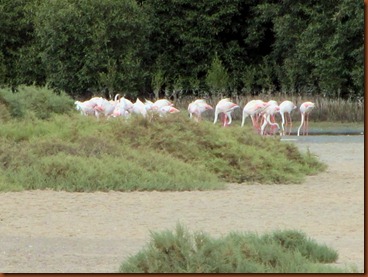 Unfortunately the refuge was closed so I want to go back when it’s open for a closer look….it’s right on the highway so very easy to get to on the way into Dubai.

Then we hit Seville’s for our dinner and show. 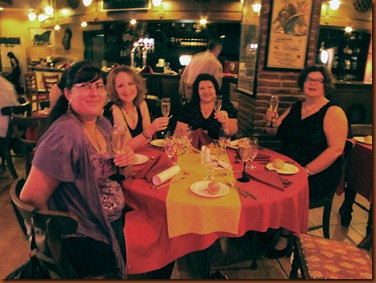 The food was not very good the but the flamenco dancers were great. 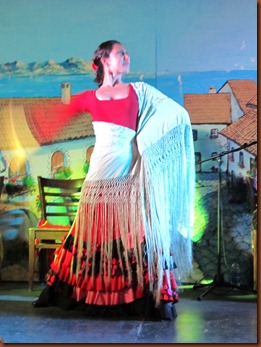 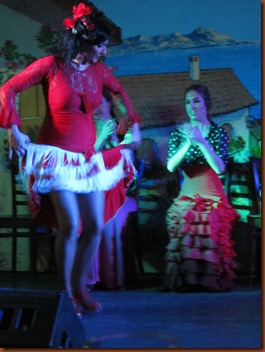 “The streets of Prague were a fantasia scarcely touched by the twenty-first century—or the twentieth or nineteenth, for that matter. It was a city of alchemists and dreamers, its medieval cobbles once trod by golems, mystics, invading armies. Tall houses glowed goldenrod and carmine and eggshell blue, embellished with Rococo plasterwork and capped in roofs of uniform red. Baroque cupolas were the soft green of antique copper, and Gothic steeples stood ready to impale fallen angels. The wind carried the memory of magic, revolution, violins, and the cobbled lanes meandered like creeks. Thugs wore Mozart wigs and pushed chamber music on street corners, and marionettes hung in windows, making the whole city seem like a theater with unseen puppeteers crouched behind velvet.”
― Laini Taylor, Daughter of Smoke & Bone

This is the kind of quote that pushed me towards Prague and some of this quote actually felt true as I floated down those meandering cobblestone streets, past costumed musicians and pastel rainbows of buildings. 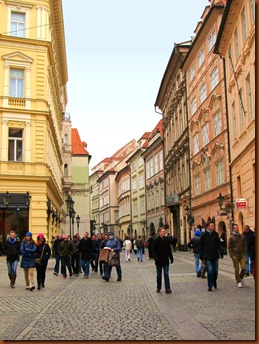 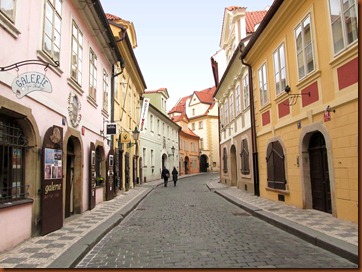 There’s a certain quality of the fairytale both in the fantastic and the gruesome stories of Prague.   Here’s a picture of the ornate and almost overwhelming St. James Church which has an actual human arm hanging over the front door. 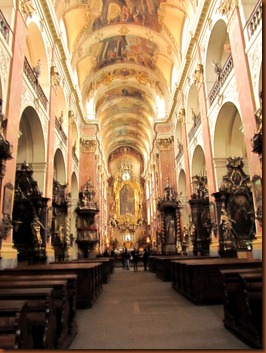 The legend is that a thief broken into the church and tried to steal a gold medallion from around the neck of a statue of St. Anne. 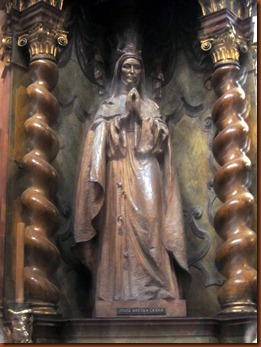 The statue came to life and grabbed his arm before he could get away and froze in place with the thief’s arm trapped.  When the priests arrived in the morning they decided to cut his arm off rather than damage the statue.  After quite a bit of screaming and bleeding, the arm was almost detached when the statue came back to life and released him.   To ward off any other thieves, the priests hung the arm over the door and there it still hangs. 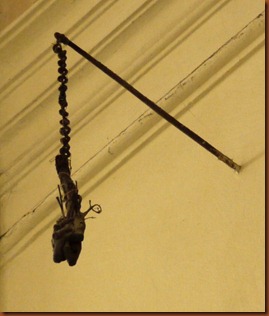 Apparently, the thief returned later, impoverished and crippled.  He was given a job by the priests and spent his life working in the same building as his arm.

Of course, that doesn’t beat the gothic cathedral of St. Vitus which was  begun in the thirteenth century by King Charles the IV to house the arm of St. Vitus. 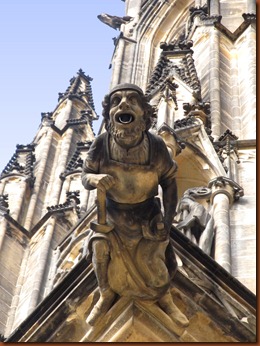 The elaborate carvings on the door the church make it pretty obvious that the builders had no idea which arm it was because they feature both the right and left arms.  There is a good chance that the arm never made it to the cathedral but, never fear, there is a body part within. 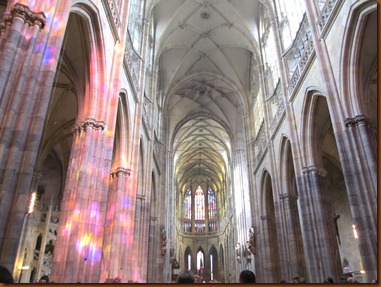 At the alter is a large silver tomb that holds the tongue of St. John of Nepomuk.  Before John was a saint, he was the head priest at the cathedral in the fourteenth century.  One of his duties was to hear the confession of the king and queen which turned out to be bad luck for Johnny.  The king became convinced that the queen was having an affair so he insisted that John tell him what she was confessing.  John refused to betray the confessional and was tortured.  The King eventually had his tongue cut out and his body thrown off a bridge.  There has been some speculation that John was the man that the queen was having the affair with that’s definitely not the official story.                    Luckily for all of us, they saved the tongue

It gets better!  About sixty kilometers outside of Prague is the medieval town of Koutna Houra which was the minting capital of Bohemia for four hundred years.  During the crusades, one of the local priests brought back some soil from the holy land and spread it around the local church in Koutna Houra which made it the place to get buried.  All the rich and famous wanted to be laid to rest in this 'almost’ holy place.  This continued for about three hundred years, through the black plague and through wars and revolutions.  So, a lot of burials.

Jump forward to the seventeenth century when the Hapsburgs are ruling Bohemia and new Catholic churches are being built to replace the Protestant ones that the locals preferred.  What do to with all the remains of all these burials???? Hmmmm…I know, lets build a church out of them. 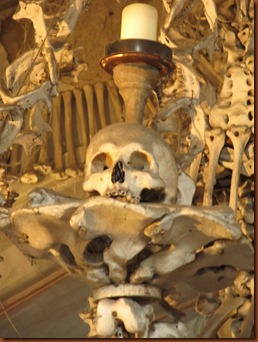 We’ll make chandeliers and pillars from their bones. 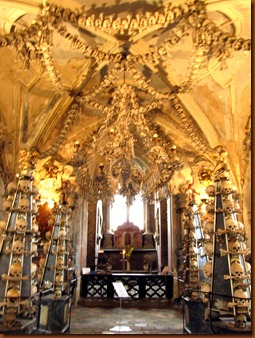 And hang festive skull streamers from the ceiling. 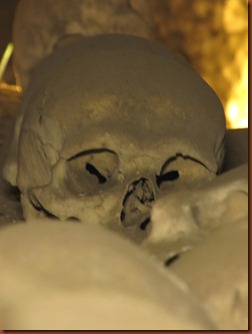 This place puts the ‘grim’ in Grimm’s fairytales.

On the other hand…. 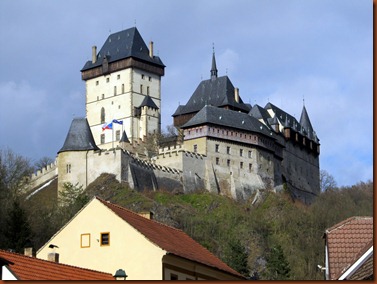 Karlstien Castle, forty kilometers outside of Prague, has perched atop this mountain for seven hundred years.  It’s a bit bare bones inside but the walk through the little town while looking up at it was lovely. 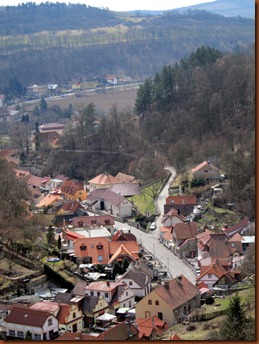 The magical astronomical clock in Prague town square was built in the thirteenth century and was a wonder of the world for it’s time. 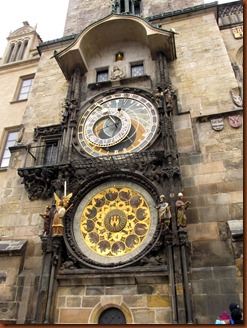 These three characters, representing different sins, all shake in fear at death when the clock strikes on the hour.  Music plays, the apostles come out of the clock and a golden rooster crows.  Very exciting! 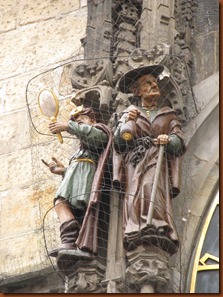 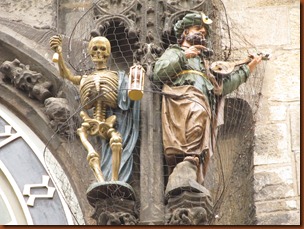 For those looking for a more sophisticated show, there is the fabulous art-nouveau Municipal Hall which was where the end of communism was announced twenty-five years ago as well as being Prague’s seat of power for hundreds of years and is now a museum, concert hall and a collection of fantastic cafes. 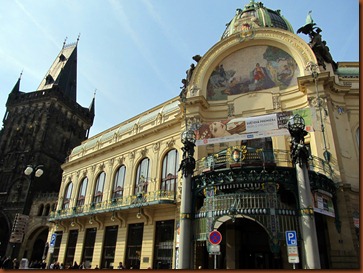 I listened to the Prague Royal Orchestra play Mozart and Vivaldi in the Smetana Concert hall inside. 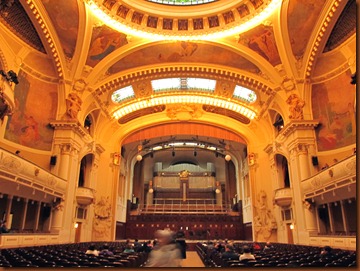 I fell in love with Alphons Mucha in the Museum. 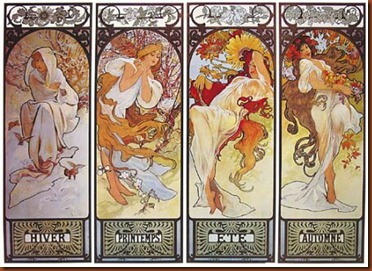 Once past the Municipal hall and in the Old Town, the buildings are beautifully preserved with tourist shops and restaurants tucked inside them.  The town square was filled with food stalls and shops for the Easter festival. 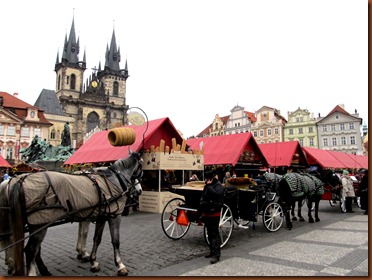 This is their version of a waffle cake.  Delicious! 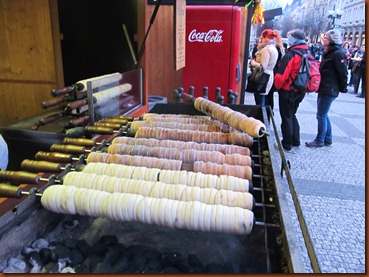 After checking out the square, it’s a short meander to the famous Charles bridge (where they threw the ill-fated John from).  As previous bridges kept getting washed away by floods, King Charles IV wanted to make sure his bridge would stand forever and consulted astrologers, clerics and mystics and they provided him with an auspicious date and time to begin the construction ….it’s still standing seven hundred years later so I guess they picked the right day. 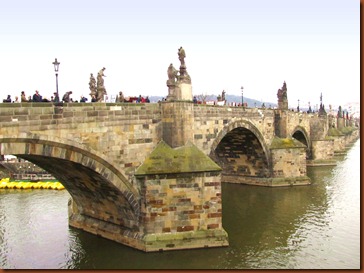 There were a lot of good restaurants and pubs.  I really liked the restaurant at the Municipal Hall which was where one scene of Triple X was filmed and at a pub, later during the week, I tried a traditional pork knuckle with sauerkraut and one of many fantastic Czech beers . 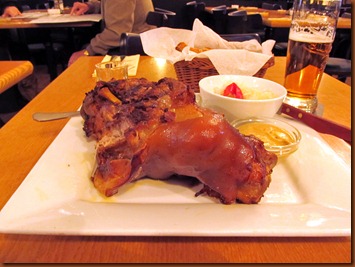 It was freezing in Prague so I’m relatively happy to be home again and I spent the last day of my vacation baking my friend Mary’s birthday cake. 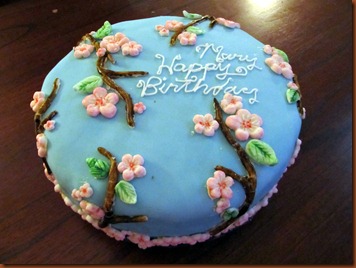