So I'm counting down the days until I go to Athens for spring break.  It's going to be sooooo good but I'm also still having fun here.  Rose, one of my 'podmates' in the office got engaged so we had a little lunch and I baked a cake.
I was also invited to a 1920's murder mystery dinner so I spent some time the last couple of weeks sewing and creating a costume.  I went with the drop waisted look with pearls and a fancy headband. 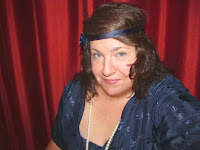 The dinner was great.  We all had to use a password to get into the speakeasy onboard the SS Titania and Chernell (Sharon) and Lord Luton (Serge) had set the mood with roaring '20s music, old newspaper articles and games.  Apparently, peanut butter and jelly sandwiches had just been invented and were all the rage so those were our appetites as well as deviled eggs which were big at the time.  My character was Agatha Sotherby, a mystery novelist and I decided she was from the south so I spoke with a southern accent all night.  I also kept promoting my newest novel "Murder on the Mississippi", the cover of which I created and taped to my Kindle.
The dinner was fantastic and discovering all the clues was so much fun.  My character had been having an affair with Vic Tory the flyboy and we had faked my kidnapping so that he could get airplane parts in an attempt to cross the Atlantic before Charles Lindburg.  I was also responsible for writing poison pen letters to a few of the characters...quite the trouble maker :)  Liz (in front) was an opera singer with a lot of secrets.  Linda (the ship's doctor) was a gambler and a womanizer and Sharon (to the right) was a fashion designer with an secret child by the Lord.  Jerry (next to me) was a black widow..all very scandalous.  I won't say whodunit but it wasn't me :)
Posted by Nicole at 2:46 PM 1 comment:

I went to another Chaine dinner last weekend.  It was so good that I've decided to join.
There are about six dinners per year.

The menu for this dinner was really creative and delicious and it was held at the Danat hotel just down the road from my apartment.  We started with champagne cocktails and hors d'oeuvre on the patio.  The dinner started with foie gras and mushroom rissoto with ripe blueberries for an appetizer followed by a seafood chowder ala cappaccino.  The fish course was salmon but it was farmed so none us were too impressed with the taste or texture...I guess the desert has some limitations.  After cleansing our pallets with a green apple sorbet, the main course of rack of lamb with gnocchi and a carrot salsa was served. 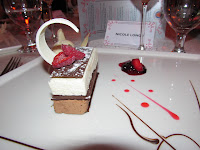 Desert was a white chocolate and milk chocolate mouse with a tart fruit compote.  Then....they brought out a plate of chocolate creations in the shape of the Dubai landscape. 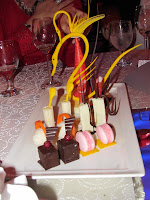 I was seated with my friends Sharon and Serge as well as some really other people that I had met at the previous dinner. So, this week at the college one of the students was possessed by a Djinn (pronounced gin) which is an evil spirit.  I didn't see it but apparently she began flailing about in class and they called the nurse.  The nurse didn't want to interfere as it was a spiritual afflication so they started to read the Quran over the student in an attempt to exorcise the Djinn.  I have no idea what was wrong with the student but the other girls in the class were all terrified that they might also be possessed.  As a result of this event I learned that every morning, they say a prayer to Allah to protect them from Djinn and even the highly educated still have faith in this way of thinking.
Interestingly, there are twelve doctors from a local hospital here today to speak on women's health issues as March 8th is International Women's Day...I wonder if they'll talk about possessions.
Posted by Nicole at 12:50 PM No comments: