Had a pretty busy weekend.  I started out by getting my very first car wash here in the UAE.  A lot of people on campus pay the gardeners $25 a month and have their cars washed a few times a week...it's very dusty here.  But this semester, they've laid off most of the gardeners and I haven't been able to track one down to start this great service.  So, off I went to the gas station.  It was quite the experience.  I went through the autowash and then I was told to drive to a bay where no less than six men jumped on my car with cloths and started buffing away like mad.  I was politely asked to leave the vehicle and they all jumped inside with cloths and vacuums.  This took about ten minutes in total and my car was totally cleaned.  All for the price of $7.  Of course the next day after playing majjong, I came outside to find that we were having the UAE equivalant of it raining after washing your car; a huge dust storm.  The jeep's all dusty again now but I'm going to take a walk around the campus today and find one of those gardeners.


It was also my friend Trevor's birthday so we went out for Italian at Casa Roma's in the Hilton for dinner.  Fantastic beef tenderloin!!! 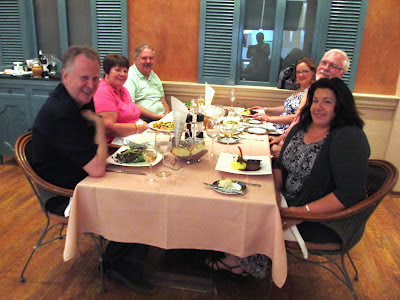 The food was excellent and they even brought out a nice chocolate cake for Trevor. 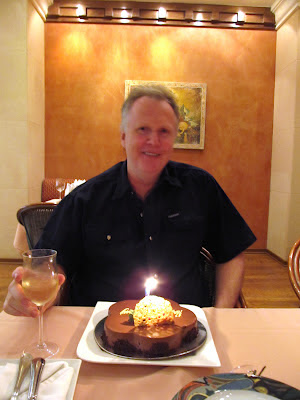 ﻿On Saturday, Trevor and I went to Dubai to the GITEX which is a giant technology conference.  We saw displays on all kinds of new stuff.  I was very impressed with the 3D LG TVs 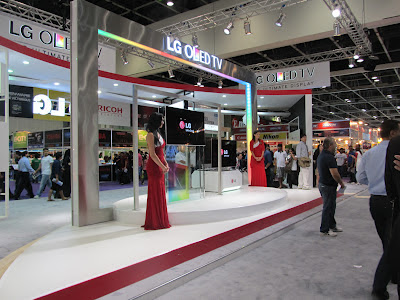 We both bought tablets...I've spent the morning setting mine up and having fun.  It's soooo much better than the ipad and it will be great for traveling.   No more heavy netbook to lug around.

After GITEX, we drove to Jamie Oliver's Italian for dinner....the food was quite good but ridiculously overpriced.  They also had a Jamie-look-alike running around wearing the same clothes and with the same hairstyle...I'm guessing it's so customers feel like they've actually gone to Jamie's but as cute as that was, I won't go back because of the price.  The chocolate brownie with raspberries and hazelnut icecream was a nice finish.

Finished up with a stop in at Ikea where I got a lovely summer duvet to snuggle under.

The other day I noticed that the courtyard had been rather neglected over the summer...waiting for the good winter weather and I've got my Kingsford all ready to go for  :) 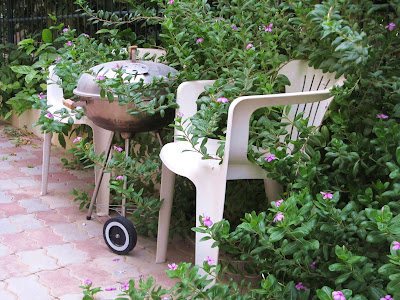 Posted by Nicole at 8:12 AM No comments:

So, it's the first week back at college and I'm already ready for another vacation.  I'm now teaching everything on a very expensive paperweight called an ipad.  On the bright side, I can now toss the stupid thing out the window of my new 'old' jeep. 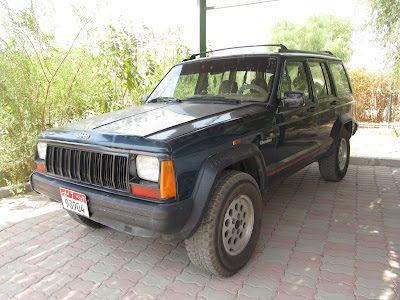 I'm getting fairly comfortable driving and haven't killed anyone yet.  It did break down last weekend...a busted radiator hose in 50 degree temperatures is not a good thing.  Luckily, it's easy to get things fixed here and the mechanic had it taken care of by the next morning for $60.  He does housecalls...can you imagine :)  Next step; dune bashing.

So, any of you who have been following my blog may have noticed my absence over the summer.  It all started when I arrived in the UK at the beginning of summer and my netbook decided to transpose all its keys so I couldn't type anything.  Things progressed downhill when the monitor began doing a nifty little version of the samba.  The people at the repair shop just looked very sad when I explained my problems so I waited for the back-school-sales to replace it with a new laptop...I've decided that netbooks are fun but not very practical for real life.  I'm going to get a tablet for traveling and hopefully this new laptop will stay healthy and happy not being dragged around in a backpack.  I was computerless for the entire summer but have to admit that it was a nice break and I barely looked at email/facebook at all.

I did have a great summer although it went too fast as usual.  I started out in London where they were gearing up for the Olympics.  I took this picture while on a Thames ferry.  The rings lift up when the draw-bridge goes up. 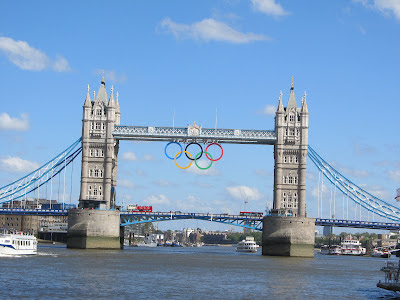 I quickly went onto Edinburgh by train.  It was a great train ride and I would recommend it to anyone.  Booking the train months early saved me more than half the price at 34 Pounds.   Edinburgh was everything I thought it was going to be. 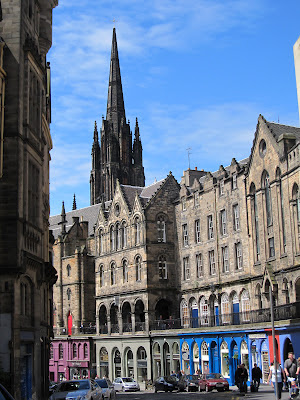 I took the 'Free Walking Tour' and it was fantastic.  We were led through town by a great guide who had written a book about all the nasty elements of the city's history so we got all the juicy details.  He was very dramatic, especially when he got passionate about Scotland.

After a couple of days in the city, I headed down south for four days of walking and visiting the Abbeys of the Scottish Borders.

The walking was good the first day and I followed these little signs. 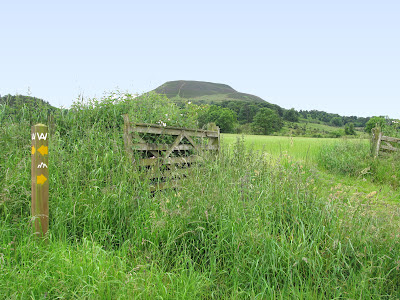 There was a lot of different terrain. 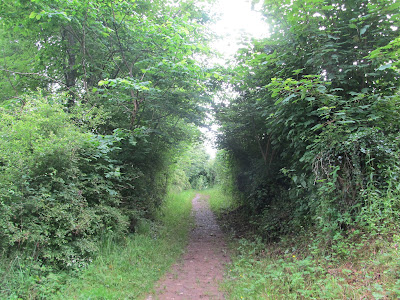 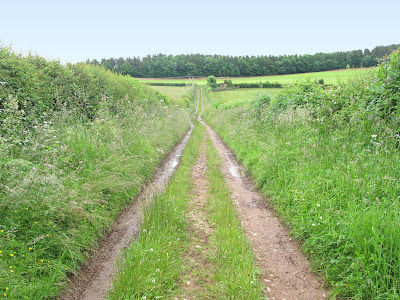 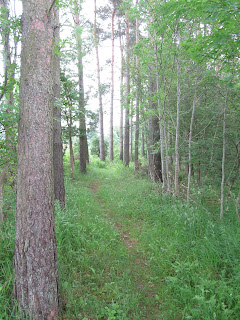 There was also lots of flora and fauna to see. 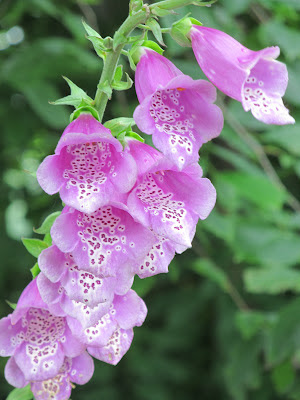 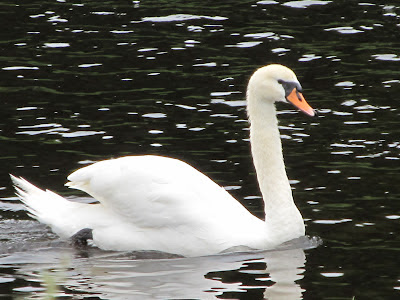 There were also weird man-made things along the way.  Temples, arches and odd places like this one which marks the spot where Thomas the Rhymer met the Farie Queen in the 13th century.  I definately got the Scottish experience. 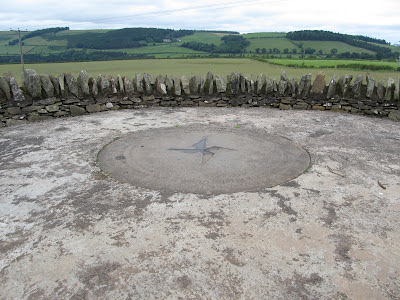 The next three days were a bit muddy but I did love all the Abbeys.  I spent several hours in each of them and had picnics.  I also visited the place where Robert the Bruce's heart is buried at the Melrose Abbey for just that little bit of extra goolish history. 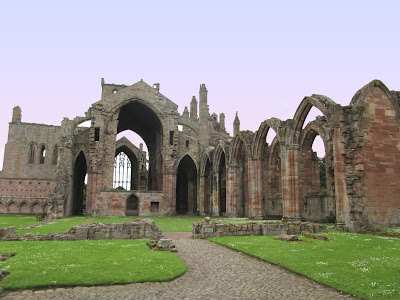 After the walking, I went back to Edinburgh for a week to see the sights.  I really enjoyed the Queen's Gallery at Holyrood Palace as it had a Jubilee collection of art from all the royal palaces and I loved the tour of the Royal Britanica and seeing the Queen's stateroom and bedroom. 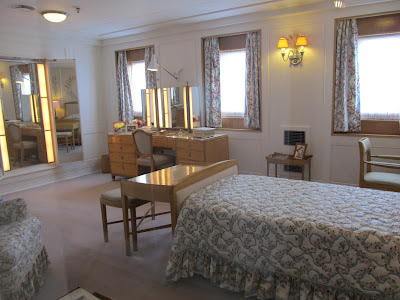 Back to London where I did all the tourist stuff including a very impressive visit to the Victoria and Albert Museum and a night at the theater to see Wicked, which I recommend to anyone of any age.

Then on to Canada for a whirlwind few weeks with the family. 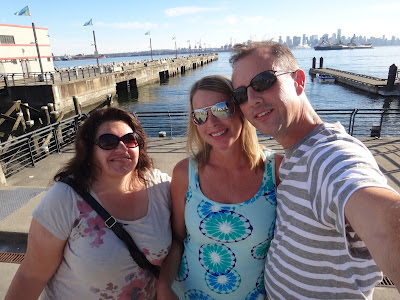 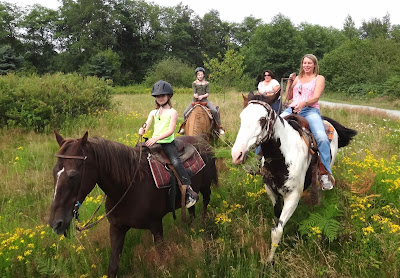 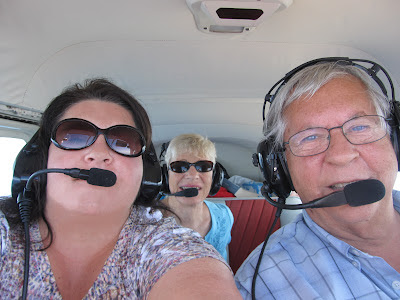 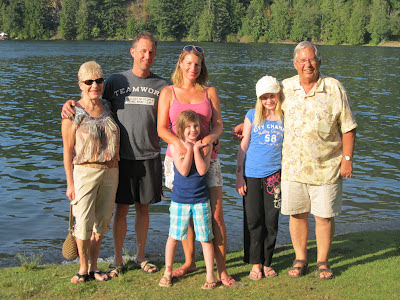 Now I'm back in the UAE and getting ready for another year.  I bought a jeep so I'll have a little more independence and be able to explore more...I'll be posting here whenever something interesting happens.

Posted by Nicole at 6:15 PM No comments: