Well it's UAE's 41st national day this coming week and the festivities have begun.  It's not as extravagant as last year but we do have a four day weekend to celebrate which is pretty nice.

Al Ain has been getting itself all prettied up.  This is Al Ain Fort which is now a museum.  These forts were actually used as recently as the 1950s when Saudi Arabia was making big land grabs in the region and Sheikh Sayed (the father of the UAE) held him off with a combination of troops, who were station at these types of forts, and negotiations.  At one point, the Saudis offered Sheikh Sayed $42 million dollars for one small area but were turned down. 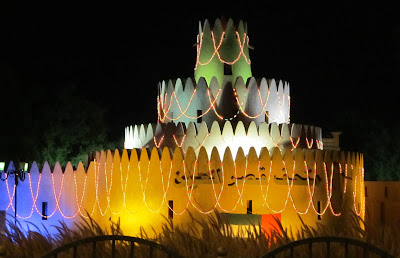 As an interesting sidenote to the conflict with the Saudis, there are still undefined borders here and things seem to shift in the sand.  Some friends of mine were camping the dunes last long weekend and were told to move by the UAE border patrol as the Saudis had spotted them and wanted them further back from the border.  My friends have no idea how they were spotted so there may be some technology in use.

As well as copious amounts of lights and banners, there have also been fireworks and will be more around town before the week is out.  These ones went on for at least five minutes and had lots of the national colours of red and green. 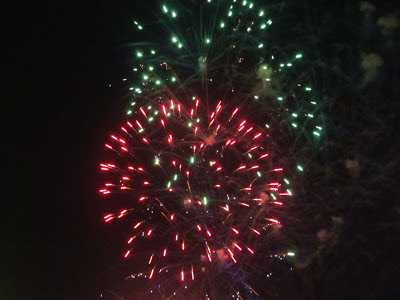 Our college had it's own celebrations yesterday.  They started out with music and dancing done by an all male group. 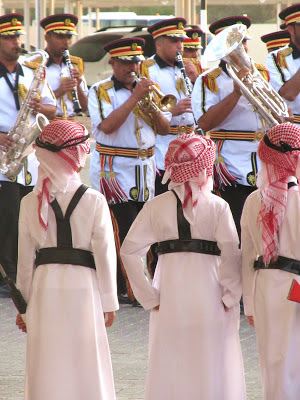 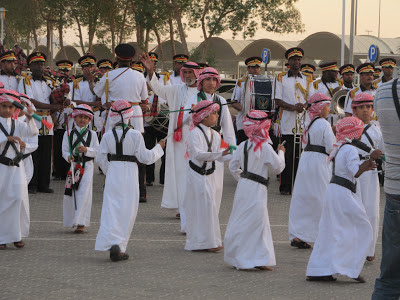 My students were involved in representing two of the seven Emirates in a booth.  They prepared food, tea, gifts, face painting and this great edible map of the UAE. 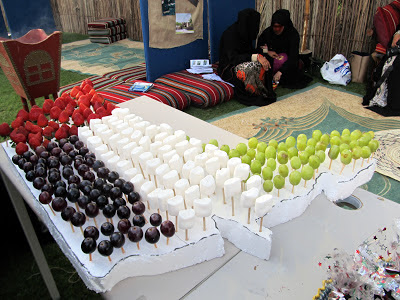 Which was enjoyed by everyone...especially the kids. 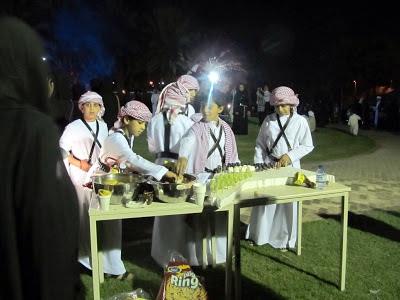 ﻿
I dressed up again for the occasion which my students thought was hilarious and they spent a lot of time taking photos of me and with me.  I can't show any of the photos with my students here because that's not allowed (as I've mention in previous blog posts). 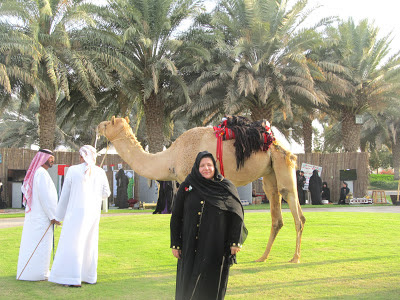 My friend Gerry also had a birthday this week so we all went out for a really good Indian dinner. 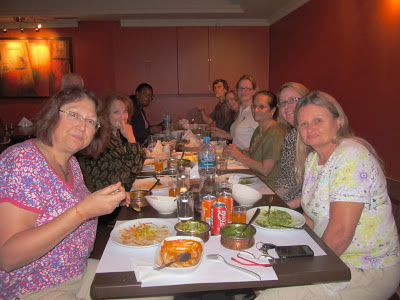 I hope she got her wish. 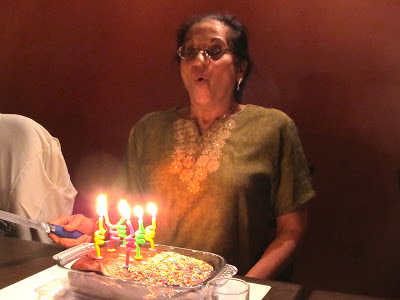 Posted by Nicole at 9:42 AM No comments: 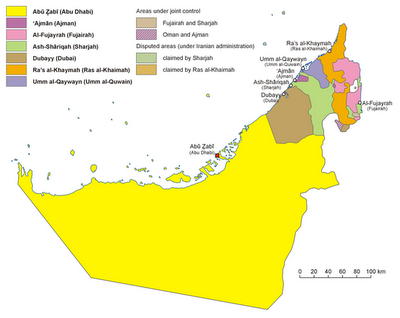 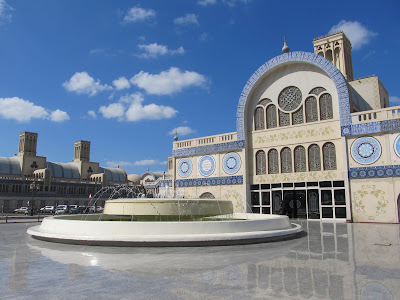 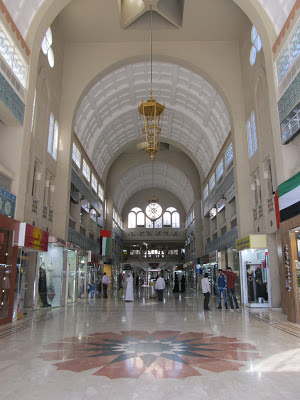 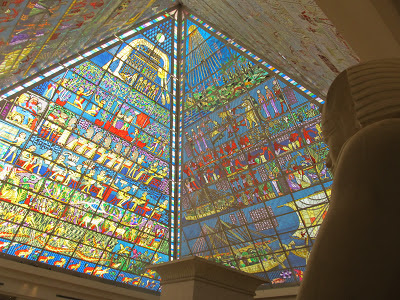 A very nice day driving through three of the seven emirates.
Posted by Nicole at 2:58 PM No comments:

I got a lovely surprise when I showed up for my friend Sharon's birthday (We celebrated our birthdays together in Nepal last year) and the birthday party was for both of us.  It was a great time organized by her lovely husband Serge. 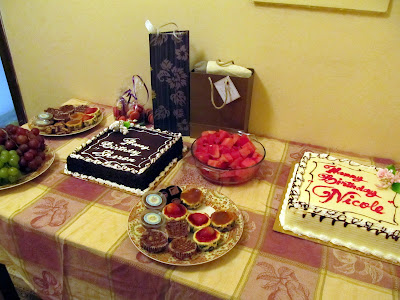 Lots of people came and they have a great party house with huge rooms. 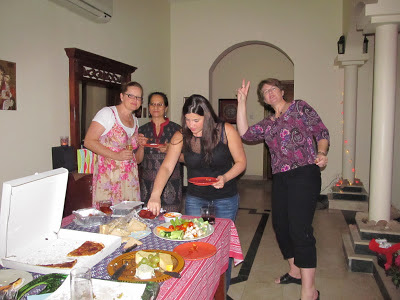 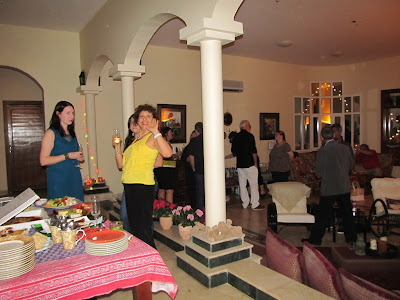 I got a ton of great gifts from everyone and now I have flowers and candles all over my apartment.
Posted by Nicole at 2:29 PM No comments:

I had a nice birthday with friends.  Yummy Indian 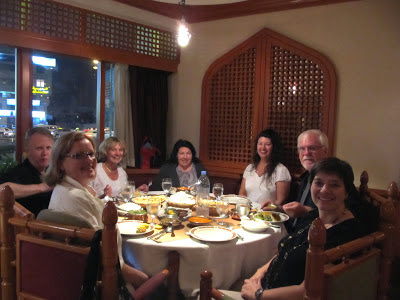 My friend Mary gave me a fantastic bouquet of flowers which are not easy to find in this part of the world. 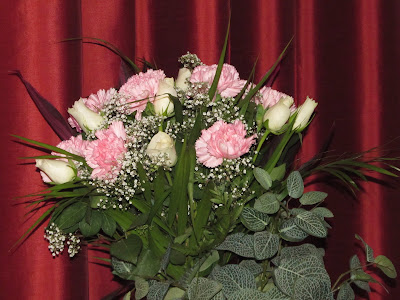 ﻿
There was a delicious selection of cheese cakes from friends but I also made a black forest cake to bring into work.  Needless to say, I've had a lot of cake this week.  Now I'm going to a birthday party this weekend and there will be more cake...I guess I'll have to force myself to have some. 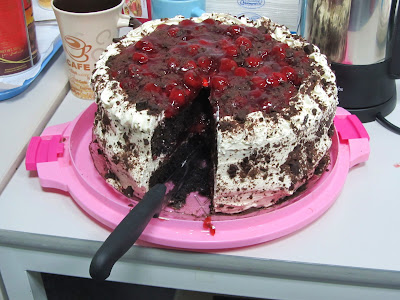 This past weekend was a four-day weekend for us here in the UAE.  Other Muslim countries got a week or two but I guess the government doesn't want any slackers here so we only had two days.  Even with only two days, it was a nice break.

The holiday is called Eid al-Adha and is meant to celebrate Abraham's willingness to sacrifice his son for God. If you remember the story, the son was replaced, at the last moment, by a goat and that's what they sacrifice here.  I've seen lots of sad, floppy eared goats being driven around in the backs of trucks in the past week.  Apparently, a lot of families still kill the goats in the home even though it's supposed to be illegal.

I did not kill a goat at home.  I went on a hike in Oman.  It was just across the border and in the mountains.   Going across the border was easy.  We just drove up, showed our passports and drove through....no line up or any questions at all.

We drove for about twenty minutes and arrived at an old fort in Wadi Madha  (wadi means valley). 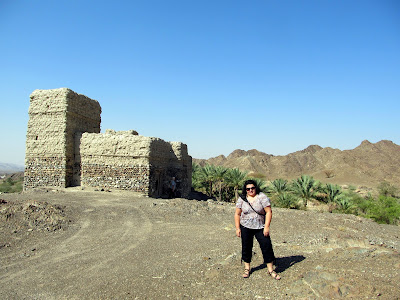 There was a beautiful oasis to walk through with pomegranates, grapes, bananas, mangos and dates. 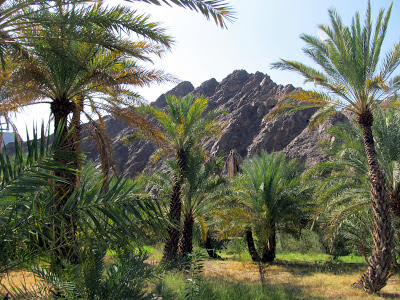 We also came upon some workers and you can see that things haven't changed much in the last thousand years for them.  We also walked by their prayer site and found their rugs, beads and hats hanging in the trees. 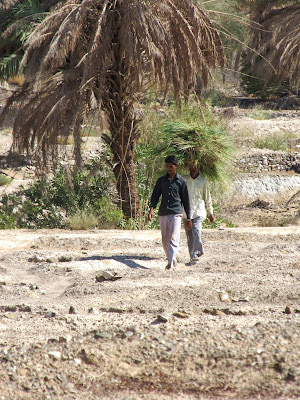 We also walked through a cemetary.  That was interesting because I learned that they don't care about their dead as they feel that once you die, your body doesn't matter.  The cemetary was just a jumbled pile of rocks.  There was also a small abandoned village from pre 1970s when everyone moved into cities as oil was discovered.  It was very obvious that they were living pretty hard lives. 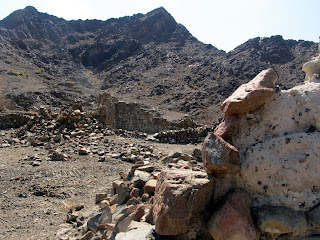 The one thing that really surprised me was the open water in the wadi...of course, that would have been why people settled there in the first place but everything is so barren that it's easy to forget that there is water here. 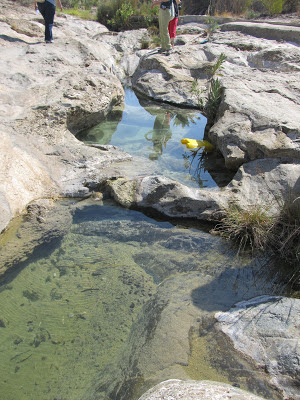 A look back as we were leaving.  Sally, who organized the walk for us, designed it so we could finish up with this very picturesque view. 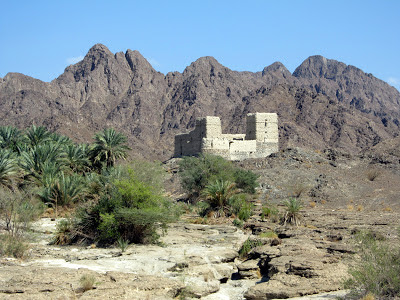 We also stopped at an Omani gas station to fill up because the gas is only $.18 per litre compared with $.24 in the UAE....hehehehehe!!!

I spent the rest of day at a luxurious buffet luncheon stuffing my self with goodies so, a good day all around.
Posted by Nicole at 3:47 PM 1 comment: